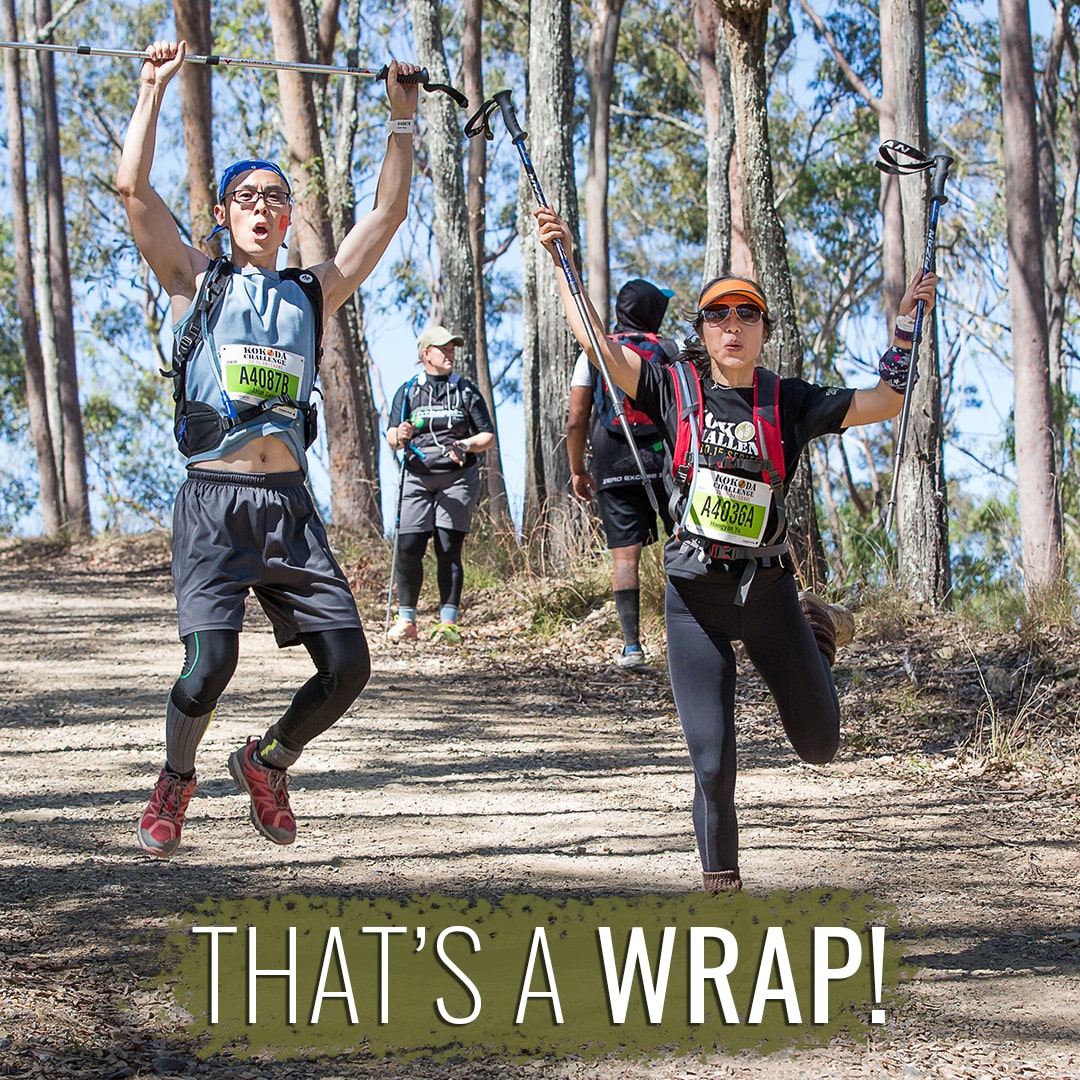 The 2021 Kokoda Challenges are Complete

Thank you to all the competitors, volunteers, support crew, sponsors and partner who made the 2021 Brisbane and Gold Coast Kokoda Challenges so memorable! Consider our events are now done for the year, we wanted to share with you all some of the highlights, successes and statistics!

Out of these, we had approximately just under 300 people unable to make it to the start line for various reasons (any participant who had cold or flu like symptoms was asked not to attend as a part of our COVID event plan that was approved by Queensland Health.)

Out of these 2,300 participants, there were 66 who had to withdraw after taking off from the start line and did not make it to the finish line (we expect to see all 66 of you at the start line next year!)

Emma was the most common first name out of all participants across all Brisbane events.

60 brilliant volunteers helped us put the event together for you all from logistics to sausage sizzles.

The split between genders was almost exactly 50/50, but there were just slightly more females than there were males across all distances.

The oldest participant was 80 years old who took on the 15km challenge.

In the 48km event, the fastest overall team was school team SAAC The Frothers (St Andrew’s Anglican College), this team was awarded the Bert Kienzle CBE School Cup for winning the 48km event. The fastest 48km open team was team Tight Butts and Sweaty Nuts (who also has one of our favourite team names) who completed the 48km course in 7 hours and 30 minutes. The very last team crossed the finish line after walking for 17 hours and 34 minutes.

The first 30km open team was 3 Whippets and a Pensioner who successfully completed the event in 3 hours and 37 minutes, with the fastest school team SAAC Will Stars coming in just behind them in 3 hours and 43 minutes (another St Andrew’s Anglican College team) who were awarded the Clarrie Meredith School Cup. The final 30km team finished in 11 hours and 10 minutes.

The fastest 15km open team was team Odyssey Fitness Fanatics who completed in 1 hour and 35 minutes. The fastest school was another St Andrew’s Anglican College team ‘SAAC of Potatoes’ who came in second overall, running the course in 1 hour and 39 minutes! The last team crossed the finish line in 6 hours and 50 minutes.

Some of our favourite team names were The Holy Walkamolies, Started Slow and Getting Slower, Easier Said Than Run.

Due to COVID border restrictions, we had a large number of last-minute participants unable to attend the event as they reside in different states, meaning a total of 2,855 participants were at the various start lines. This was also the first year in Kokoda Challenge history that all participants were required to wear face masks at the start line, again as a part of our COVID event plan.

We had 441 responses to our post-event survey revealing 73% of those people were participating in a Kokoda Challenge for the very first time. 95% of you stated that you were either satisfied or very satisfied with the overall event.

185 amazing people all volunteered their time to help us deliver the Kokoda Challenge event.

6,080 litres were consumed, all of which was generously donated by the Spring Waterman who supports the Kokoda Challenge every single year!

The event photographer SOK Images took over 15,319 photos of you and your teammates.

Shout out to all the Ben’s who participated, this was the most common first name in the Gold Coast event!

There were slightly more males than there were females in the crowd, 56% of competitors were male (this figure excludes participants who chose not to state their gender).

The oldest participant was 78 years old.

The fastest 17km team was school team ‘St Joseph's College Coomera – Teal’ who completed the full course in 2 hours and 5 minutes who were awarded the John Metson School Cup, the first team to ever be awarded this cup as 2021 was the very first year of the 17km challenge in the Gold Coast. The first open team ‘Muddy Paws’ came through in 2 hours and 29 minutes  and the last team crossed the finish line in 5 hours and 54 minutes.

Some of you may know Bianca Dye from the Hit Gold Coast’s Network breakfast show Bianca, Dan & Ben. Her team Hit 90.9 finished in 3 hours and 52 minutes. 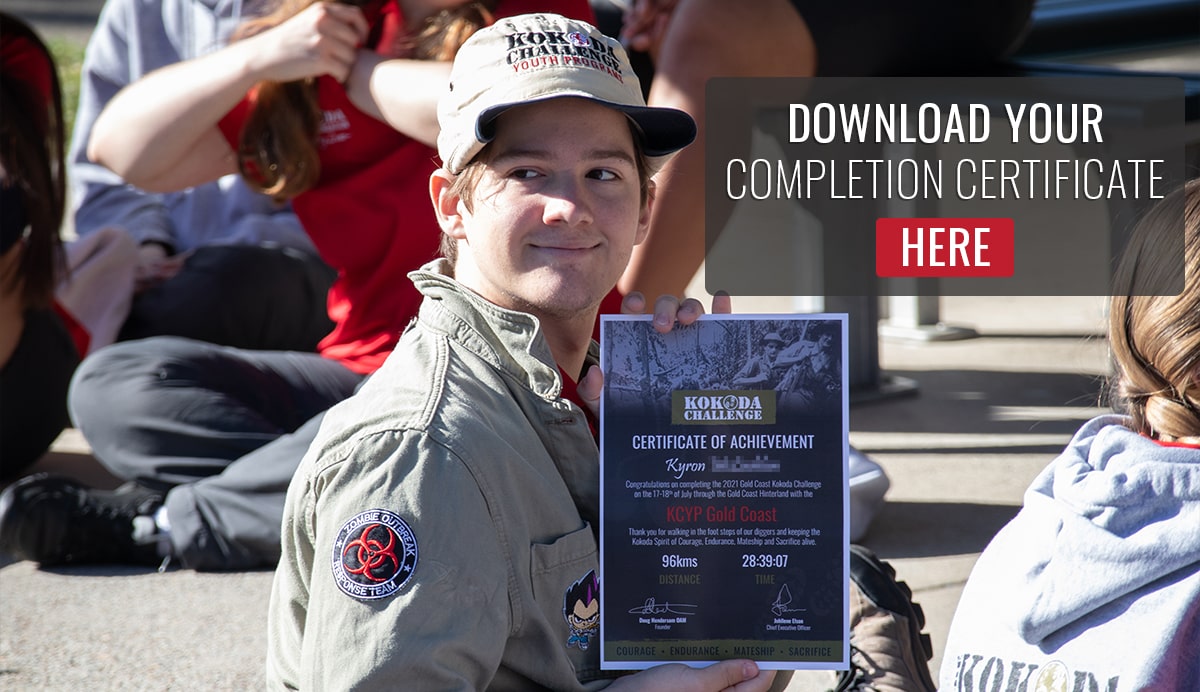 Team Spurned and Burned was the first 48km open team to cross the finish line in a total of 6 hours and 18 minutes, later followed by the first school team ‘SALC31’ (St Andrews Lutheran College) who won the Jim Stillman 48km School Cup for finishing in 6 hours and 43 minutes. The last 48km team crossed the finish line after 27 hours and 19 minutes of hiking.

As for the 96km event, the overall winners were trail runners from team ‘Gold Coast Physio & Sports Health’ finishing in an incredible 11 hours and 59 minutes. The first ladies team “The Goats” crossed the finish line third overall in 14 hours and 56 minutes. The winning school team (TSS Sharky from The Southport School) of the Stan Bisset School Cup came across the finish line in 17 hours and 15 minutes while the last team was our very own Kokoda Kids from the Brisbane Kokoda Challenge Youth Program who completed 96kms in 36 hours and 41 minutes.

There were 55 Gold Coast Theme Parks Passes handed out to all winners of each event and to the kids in our On The Right Track Youth Program, all generously donated by Village Roadshow.

Some of our favourite team names were Saggy Tits and Sweaty Bits, Blood Sweat & Beers and Red Hot Chilli Steppers.

Stay tuned to find out who our highest fundraising school team is as they will be awarded our most prestigious award; the Bruce Steele Kingsbury VC School Cup. The highest fundraising open will team will win the adventure of a lifetime with Getaway Trekking who have generously donated a 10-day Aussie Camino Trek to award all their hard effort.