A Change In Perspective 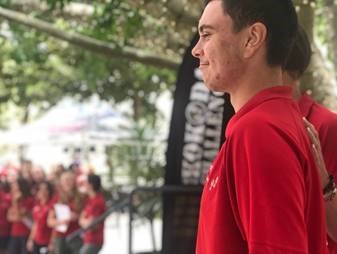 A change in perspective

Jarred Lancaster, also known as Lance by his team mates in the Logan KCYP team, has opened his eyes to a whole range of new possibilities this year through his participation in the Kokoda Challenge Youth Program. Jarred has Attention Deficit Hyperactivity Disorder (ADHD) and Autism Spectrum Disorder (ASD) and came into the program not knowing anyone.

Looking back to the beginning of the year, Jarred described himself as somewhat of a zombie who didn’t want to get out of bed and just followed along doing what he was told.

Since becoming a part of the Logan KCYP team, Jarred has made a lot of new friends and learnt how to distinguish real friends from fake ones. He has gained confidence in himself to try new things and become more open minded to what he has and shifted his perspective of what is really important in life. Taking his first trip overseas to participate in the cultural experience in Papua New Guinea, Jarred enjoyed exploring the way the locals spent their day to day lives. He appreciated how friendly they were inviting him into their own homes and seeing the joy on their faces, regardless of the fact that they didn’t have the basic necessities we enjoy here in Australia such as electricity.

Eager to give back to his community, Jarred wants to be an advocate for positive change within his community. As a student of Beenleigh State High School, he has recognized that currently the school has been given a poor reputation due to connotations of alcohol and substance abuse. It is Jarred’s understanding that people at his school fall victim to this stereotypical behaviour because they don’t have people backing them up. Having seen how far he has come in such a short period of time as part of the Kokoda Challenge Youth Program, Jarred believes that with the right support and attitude he will be able to implement positive change within his school environment and broader community and initiate change to his school’s reputation.

Looking to the future, Jarred is excited to pass Year 12 in 2020 and apply for an apprenticeship to become an orderly at the hospital. Carrying with him the bond he shares with his new group of friends within the Logan KCYP team, Jarred feels a wealth of support he considers himself lucky to have found. Expressing encouragement for next years Kokoda Kids, Jarred believes that by applying for the program you will be opening yourself up to having a great time, learning new skills, endure hardships and make amazing memories with new friends together. To the Kokoda Challenge participants, Jarred is grateful that through your fundraising efforts he has be able to take this eye-opening journey, and will see the effects of the program long into his future.

“No matter how hard it seems sometimes, it’s the fact that you’re giving it a try shows you have more courage and bravery than those who decide not to.”
– Jarred Lancaster